There is a palpable excitement level surrounding two-time Grammy-nominated and millions-selling progressive music titans, Dream Theater and their upcoming 14th studio album, Distance Over Time. On the heels of two recently released tracks, “Untethered Angel” and “Fall Into The Light” (both of which have received millions of plays to date via YouTube and Spotify), the band returns with their first official single from their February 22nd release. “Paralyzed” is quintessential Dream Theater; a song that showcases the band’s unique ability to write memorable melodies backed with unique song structures and maestro-level musicianship all at a radio-friendly running time of 4:18. The song will be impacting Active Rock and Metal radio later this month. Wayne Joyner, who also imagined the clip for “Fall Into The Light”, created the animated video for the song. The video for “Paralyzed” can be seen here: https://youtu.be/C7m7l8iqGAk.

“The song is an introspective reflection on the negative impact that being obstinate or single-minded can have on important relationships,” explains guitarist John Petrucci. 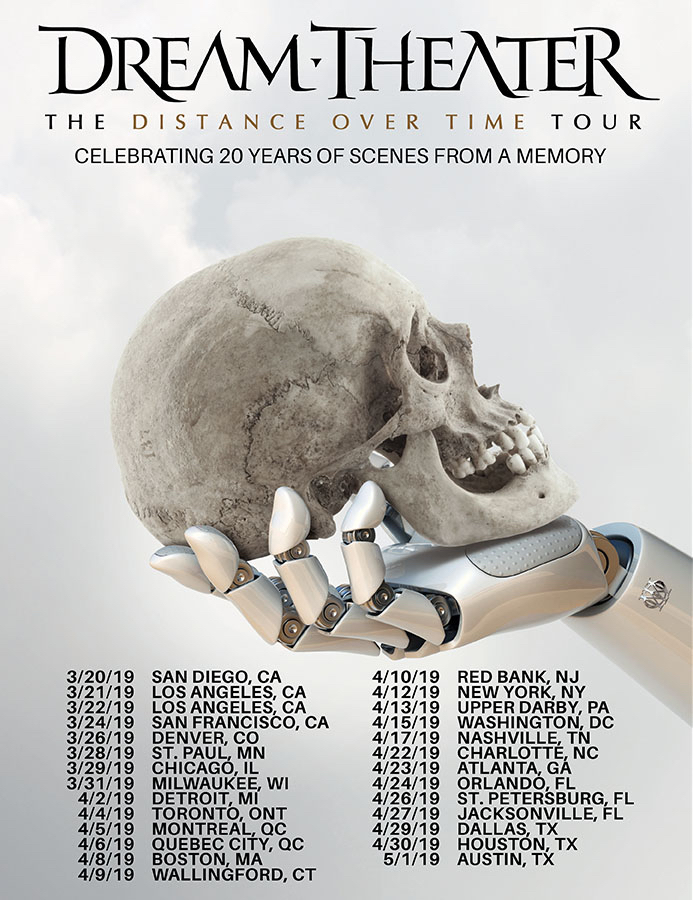 The tracklisting for Distance Over Time is:

Dream Theater is also planning to hit the road in support of the new album. The Distance Over Time Tour of North America kicks off on March 20, 2019 in San Diego, CA. The tour will run for seven weeks before wrapping up in Mexico City on May 4, 2019. Select European festival dates for the summer are already announced with more dates being added and announced in the near future. Information on tickets for all upcoming shows as well as VIP packages can be found at www.dreamtheater.net.

Progressive metal pioneers Dream Theater— James LaBrie (Vocals), John Petrucci (Guitars), Jordan Rudess (Keyboards), John Myung (Bass), and Mike Mangini (Drums) — share a unique bond with one of the most passionate fan bases around the globe as evidenced by their two GRAMMY® Award nominations and 15 million records sold worldwide. The 1992 opus Images & Words received a gold certification and landed on Rolling Stone’s coveted “100 Greatest Metal Albums of All-Time.” Guitar World placed the follow-up Awake at #1 on “Superunknown: 50 Iconic Albums That Defined 1994.” 1996’s A Change of Seasons notably soundtracked NBC’s coverage of Downhill Skiing at the 2002 Winter Olympics. Fans voted the 1999 Metropolis Pt. 2: Scenes from a Memory the “Number One All-Time Progressive Rock Album” in a 2012 Rolling Stone poll. Not to mention, it ranked as the “15th Greatest Concept Album” by Classic Rock.  2009 saw Black Clouds & Silver Linings crash the Billboard Top 200 at #6 as A Dramatic Turn of Events [2011] and Dream Theater [2013] maintained a three-peat in the chart’s Top 10. Consequence of Sound dubbed 2016’s The Astonishing, “An absolutely unique experience.”  Beyond three platinum and two gold videos, the group was inducted into the Long Island Music Hall of Fame in 2010. On its 14th full-length and first release for InsideOutMusic / Sony Music, Distance Over Time, the band recharge the brotherhood that has kept them creating music together for over 30 years. It’s Dream Theater at their most dynamic, direct, and definitive.