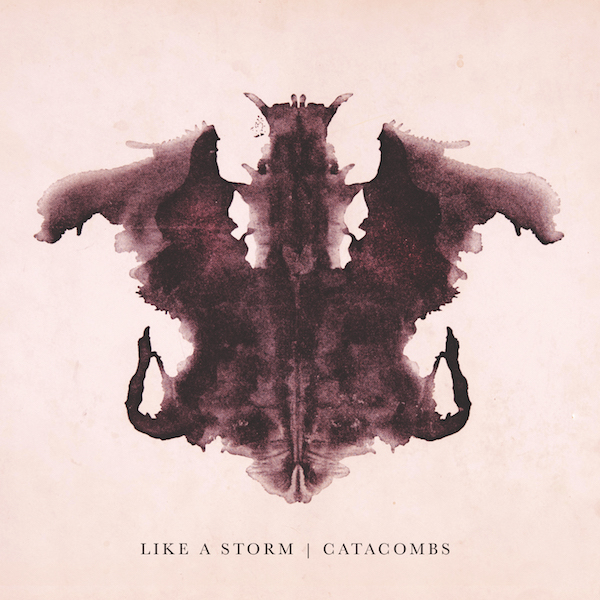 Imagine a soul filled with the tangled labyrinths of life, one bursting with long-hidden vessels of the anguish not visible to the human eye; angst and sorrow that may have been forcefully buried but now is slowly rising to the surface. A time of personal reckoning of the soul.

Imagine no more, because this is Catacombs. And its creators – Like A Storm – have fully illustrated they are more than capable of moving into a heavier and darker direction than ever before.

STARTING ON THE PATH TO THE CATACOMBS

The brothers, originally hailing from Auckland, New Zealand, moved to North America around 2006, which enabled the band to grow its audience base via touring and recording. The band released its first album, The End of the Beginning, in 2009, which featured “Chemical Infatuation” as its single. During this time period, the band toured with Creed, Shinedown, Alter Bridge, Skillet, Puddle of Mudd, and Drowning Pool, to name just a few, before releasing Like A Storm Unplugged in 2011. A DVD entitled Southern Skies was released in 2012, followed by an EP, Chaos Theory Pt. 1.

In 2013, the band released a live double album, Worlds Collide: Live from the Ends of the Earth. The year 2015 saw the release of Awaken the Fire, which included newer versions of songs found on Chaos Theory Pt. 1: “Love the Way You Hate Me,” “Wish You Hell,” “Break Free,” “Never Surrender,” “Southern Skies,” “Six Feet Under,” “Nothing Remains,” and Coolio’s cover, “Gangster’s Paradise.”

And the touring continued. From 2016 on, Like A Storm seemed to endlessly play numerous festivals and shows, and opened for acts such as Hellyeah, Devour The Day, Three Days Grace, Gojira, Sevendust, and more.

But, touring is a good thing, right? It was the impetus for Catacombs, according to Chris Brooks.

“I think a lot of this record was musically inspired by touring so much,” admitted Brooks. “If you’re kind of playing every night, like all over the world, it pushes you musically. You want to develop things and sort of tap into the new sounds. I think it just happened naturally. When we started making this album, we had an idea, a vision of what we wanted to create that eventually turned into Catacombs.”

As noted, Catacombs is a concept album, complete with 11-songs and the good ol’ didgeridoo that give listeners more of a glimpse of what comprises Like A Storm as a band and as individuals. From the head-banging “These Are The Bridges You Burned Down” to “Solitary,” the band has got it covered.

The concept took root after the Like A Storm visited The Catacombs in Paris, France on a day off from touring. For history buffs, the cemeteries were so over-run that six-million people ended up being buried below. Kent Brooks reflected that they “pushed all of this disease and decay five stories down beneath them. It hit me that we’re all the same way…on the outside, we’re told to project a ‘happy’ and ‘normal’ exterior; but just below the surface, there’s a much darker truth that we hide.”

“For us, it was the album to journey inwards,” Brooks agreed. “You sort of acknowledge those things about yourself that you’ve tried to distract yourself from, looking as to what is going on inside of you, whatever is going on in your life.”

Fans got an opportunity to preview what the band had in store when Like A Storm released “Pure Evil” in early 2017. Again, the band continued its use of Biblical analogies as in the past. It appeared to some, though, that the band was extremely anti-religious, but Brooks disagreed with that assessment.

“It’s not so much as being anti-anything,” he said, “but just challenging everything out there in the world. It’s an attack on the hypocrisy that goes on, whether it’s in politics or organized religion, and the way that people are exploited by these people that turn out to be so corrupt.”

What about “The Devil Inside”?? The video also uses the imagery of a priest and hmmm…well, watch the video.

“Again, it’s much less about the idea of someone with devil horns and a red tail living within your thoughts,” Brooks insisted, “it’s more about battling your own demons. It’s everything that you’ve tried to push down inside yourself and when you start acknowledging it, you find some things you aren’t proud of, things that you have deliberately kept hidden. It’s certainly about much more about yourself and everything you haven’t wanted to fight.”

And what better place to record about SIN than Las Vegas! Brooks also deflated that assumption. Been there, done that, got the t-shirt, basically. Plus, the album was also being written in Toronto, Canada, where Kent and his wife are raising their family; as well as Los Angeles, where Wood resides. So, scratch that theory.

“I guess what’s funny it that most people go to Vegas to party or experience all those other things they don’t encounter in their everyday life,” Brooks said. “We experienced or witnessed all that while on tour. Which is not why we chose Vegas, by the way! You get away off the main strip and it’s totally different to the Las Vegas everyone knows about. I needed to relax, and Las Vegas offered that. No stories of debauchery to share.”

In print, anyway. Plus, it is a warm haven for Kiwis who aren’t used to the colder temperatures that the United States has to offer.

“We recorded Awaken the Fire in Michigan,” Brooks said. “We rented a lake house and we were like, wow, what a fun and creative way to make the record, totally void of all the distractions! And then it started to get cold. Really cold. Really, really cold. And we were in the middle of nowhere. We were like, okay, next record we do is going to be somewhere warm! And that was Las Vegas. It has a different energy obviously as compared to the middle of nowhere in this tiny lake house in Michigan!”

THE LONG AND WINDING ROAD

So, here is Like A Storm, in various parts, feeding off the energy that was to become Catacombs. What does Brooks feel the members owe to the personal success of the album?

“I guess the energy or the vibe is one of the most important things,” he stated. “That initial spot that just pulls you in, whether you are writing it, playing it live, or just listening to it. That initial energy is just really important. For us, we really just wanted to continue to push the melodies and write lyrics that have substance. I think we did that with this record.”

How will fans who have been with Like A Storm from the beginning feel about the new direction Catacombs has taken? The band recently held a private listening party for fans to gauge their reactions.

“So far, so good!” Brooks reported. “We feel lucky because we have the most amazing and loyal fans! I mean, I know there may be some people who don’t like the journey we’ve gone on. But many of the fans who have heard it have been on this journey with us since the beginning and have been excited to grow with us.”

DARKNESS THERE AND NOTHING MORE

Brooks also had the opportunity to use his creative juices elsewhere. Brooks, along with one of his best friends, Dave Muselman of Jericho Guitars, designed their first Signature electric guitar together dubbed THE RAVEN. (Go to http://jerichoguitars.com/product/raven/ for details.)

“I really have liked the guitars I have been playing,” Brooks said, “but I was running into things like them being discontinued or getting ones that weren’t quite matching the sounds I wanted as the music progressed. I wanted one that was mine, one that fit in not only the playing style but the visual style as well. Dave was hanging out with me while we were making Catacombs and we were just talking about my dilemma. He told me to come up with a couple of designs, choose one, and that he would put it out.”

Brooks himself was undaunted by the task.

“We have always been very hands-on with all the creative things we do with the band,” he said. “So creating a guitar wasn’t that much of a jump. I knew I wanted it to have the option of the baritone scale guitar, we play churning heavy riffs and low tuning, so I went with a lot of the logistics with Dave. We had such a great time doing it that we might continue with others in the future. Obviously, we’re both incredibly busy, so trying to find a time for it is a challenge. It was very fulfilling to see an idea that I had in a different area come to completion, though.”

COMING OUT OF THE DARKNESS

If Catacombs doesn’t break Like A Storm wide open, nothing will. Brooks said the band members are willing to accept whatever comes their way.

“It’s always a challenge in an era where nobody really buys full records anymore,” Brooks stated. “A lot of bands that we have talked to decided just to put out singles rather than a full album. But for us, an album is still so important to capture our moments and give that experience to the fans. Catacombs is a full range of what we went through at that time, and that’s really important to us.”

Radio has been receptive to the album so far. “The Devil Inside” has been on heavy rotation, with fans rallying to call and/or vote in great numbers to request the track. And Brooks is grateful.

“But you know,” he added, “if you’re playing music just because you think it’s successful or you’re putting out songs just because you hope to get played on the radio…you know, then how do you deal with that and the ups and downs of this challenging lifestyle? For us, it’s like, okay, even if we weren’t able to get songs on the radio, we’d still be playing the music we love. Not being beholden to anyone else.”

When the brothers left New Zealand, did they know they would encounter this much success?

“It’s a constant surprise that it actually happened this way,” Brooks said. “We definitely had the dream and goal of doing all that we have done, and we’ve been incredibly lucky. We have always been creatively driven along the way, and we always knew what we’re working towards, again musically, what the goal is. There have been a ton of ups and downs, but ultimately, just continuing on this journey has been something we’ve always done and will continue to do.”

4 comments on “LIKE A STORM JOURNEYS INWARD TO THE CATACOMBS”