Dave Franklin was a fixture in New Jersey’s underground music community for more than 30 years, fronting one of the state’s favorite and enduring punk bands, Vision, from 1986 until his passing on January 5, 2017. On April 2, nearly 3,000 friends and fans will memorialize him with a day-long musical tribute at the Asbury Park Convention Hall (1300 Ocean Ave, Asbury Park, NJ), featuring many prominent New York and New Jersey artists who were close friends of Dave’s and shared stages over the years.

The event, titled ‘Doing it for Dave: A Tribute to Dave Franklin’ has already moved 2,500 tickets and is expected to sell out. Tickets are $25 and can be purchased via Ticketmaster, or via the Stone Pony Box Office (going fast). Proceeds from the event will benefit the North Shore Animal League and the Riot Fest Foundation, whose missions are the rescue of animals and the provision of opportunities in music to underprivileged communities, respectively. The tribute is expected to raise around $40,000 for the two charitable organizations, whose work was near to Dave Franklin’s heart.

“This is extraordinary,” says Diana Zaferlou, Vice President of Corporate and Foundation Giving at the North Shore Animal League. “What is being done in memory of Dave is inspirational.”

Featured artists include H20, Burn, Killing Time, Murphy’s Law and many other popular bands of the punk genre. Artists will perform from 12:00pm until 11:00pm. An after show/party will take place at the Wonder Bar (Fifth & Ocean Avenues, Asbury Park, NJ), featuring World Inferno/Friendship Society, a klezmer/gypsy punk band whose singer played in Dave’s first band in 1986.

“The magnitude of this tribute is simply astounding,” says Peter Tabbot, bandmate of Dave Franklin and one of the event’s coordinators. “We knew this would be big, because Dave impacted so many people over the decades, but the scale of this – from the generosity of the bands and coordinators to the response from the music community – is awesome and humbling.” 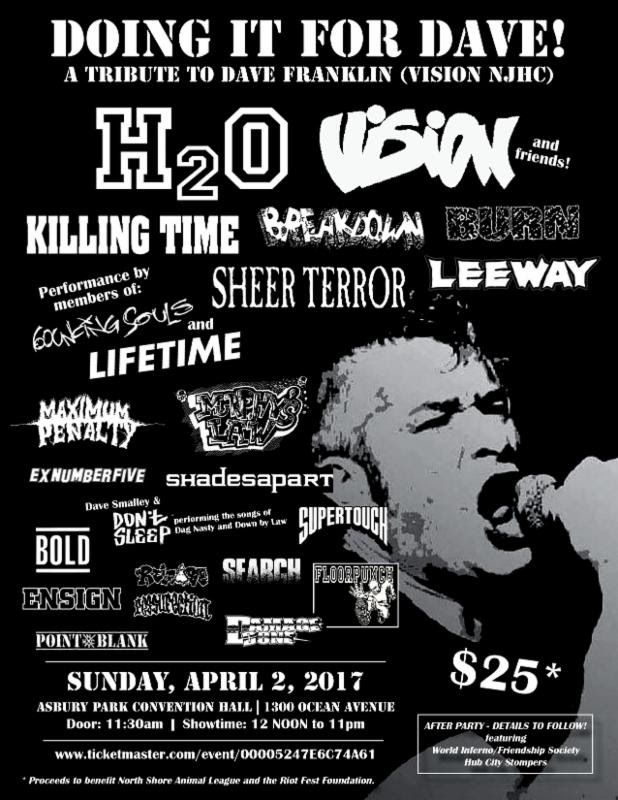