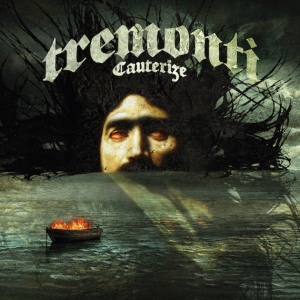 On Tremonti’s sophomore effort Cauterize, Mark Tremonti – the band’s founder and nucleus – leaves the listener smacked around and wanting for more. Mark has grown as a vocalist from the debut release All I Was in 2012. The album’s genres are a bit mixed, not the pure thrash Tremonti possibly envisioned when forming the group to express musical ideas coloring outside the proverbial lines of his current musical projects, but the album’s songs are all very strong and Cauterize works as a complete musical statement.

“Radical Change” smashes the gates open as the opening track on the record. The riffing is fierce, syncopated and thick. What impresses me most is Mark’s restraint during the solos, he’s allowed the notes to open up and compliment the piece which compositionally keeps the focus on those machine-gun riffs making the listener want to return to that over the top-testosterone fueled mayhem the opening riffs present.

“Another Heart” is a bit strange to my ears. The beginning has a big-production quality to it, very bass-heavy and very mainstream ala Earshot’s Two and some of the melodies have a quasi-Alice In Chains feel to them. Unlike “Radical Change,” the solo actually makes the track sound a bit disjointed for my tastes. His playing is undoubtedly masterful, but the shred fest somewhat cheapens what I thought could have been overall a much more mature piece which is how it started, again, restraint can do wonders. I can understand that as guitarists sometimes want to play to the guitarists listening, one can also alienate those who prefer less fretboard pyrotechnics.

The track’s “Tie The Noose” opening riff reminds me of a Pantera-pounder but soon turns very melodic – which is not a bad thing. In fact, although the track’s title sounds menacing, the melodies are inspiring and evoke thoughts of triumph over tragedy, the power to push through. “Flying Monkeys” opens aggressively, like a blood-thirsty army marching into battle. I really like this track as it mixes the melodic almost Beatle-like chromatic harmonies in the choruses (She’s So Heavy) with the pounding, simpler angst and fury of those marching battle-cry riffs. “Proof” seems to be a return to his earlier material with the jangly electric opening, rather laid back, long notes and more moderate tempo. This type is great in that it’s not out of place on the record, but whether the listener is at home or within a crowd packed in front of the stage, it allows both the record and the listener to breathe for a little while.

Overall I think the record is pretty amazing as you seem to hear something new every time you listen to it and trust me; I’ve listened to it quite a bit. The album title makes sense as Tremonti’s playing in many spots is hot enough to melt your face and the production is fantastic start to finish.

This is an evolutionary step for Mark Tremonti and the group and I like many others are definitely awaiting the next bit of music that if we have learned anything from the group’s first two releases will be heavy as hell and will not disappoint.