His voice is measured and manner precise. He is hard to read and you think he is just telling you what you want to hear. But when Slash says he is excited, you chose to believe him.

Why shouldn’t he be? His third album – World on Fire, the second featuring Myles Kennedy and the Conspirators – was a Billboard #1 US Top Hard Rock Album. Tours worldwide have been generally sold out. Throw in the release of live album, Live at the Roxy 9/25/14, and you have one happy guitar dude. In fact, as long as you stay away from mentioning a certain band called Guns N’ Roses and his impending divorce, the sky’s the limit, at least for the allotted 10 minutes.

“Yeah, I’m pretty happy and excited for the most part,” Slash said. “I’m having fun and I’m just happy to be doing what I do best.”

As the most ardent fan knows, the guitarist – born Saul Hudson in England – rose to fame in Guns N’ Roses. The 1985 lineup – featuring vocalist W. Axl Rose, bassist Duff McKagan, co-guitarists Izzy Stradlin and Slash, and drummer Steven Adler – originally released a four-song EP, Live ?!*@ Like a Suicide, as a teaser while recording for the band’s classic album, Appetite for Destruction for Geffen Records. That album sold an estimated 18 million units in the United States alone and featured the hit singles “Welcome to the Jungle” and “Sweet Child o’ Mine.”

Despite several hit albums that followed – GN’R Lies, Use Your Illusion Volumes I and II, and The Spaghetti Incident? – drugs and inner band turmoil took their toll on the group. Stradlin left in 1991 and Slash – despite having Slash’s Snakepit as a side-project – chose to leave the band in 1996.

In 2002, Slash, along with vocalist Scott Weiland, McKagan, rhythm guitarist Dave Kushner, and second Guns N’ Roses drummer Matt Sorum, eventually evolved into what was to become Velvet Revolver. Velvet Revolver, most noted for the hit single “Fall to Pieces,” was later shelved with an uncertain future when Weiland’s apparent drug issues interfered with the band’s activities. This gave faithful Guns N’ Roses fans hope that a potential reunion with the original lineup was in the works.

The years following Slash’s departure, however, saw the guitarist and Rose publically vilifying each other in the press. Slash even stated before the band’s induction into the Rock and Roll Hall of Fame in 2012 that Rose “hates my guts” while Rose commented, among other things, that the guitarist was trying to sabotage his health by forcing him to tour against his will.

Recent rumors have been circulating that the guitarist and mercurial singer Rose have mended fences, leading once again to whispers of a reunion of the band. Slash, however, sidestepped the forbidden question and quickly gave credit to Alter Bridge frontman Kennedy, who was originally one of the many vocalists that contributed their lungs for the guitarist’s 2010 eponymous solo album. 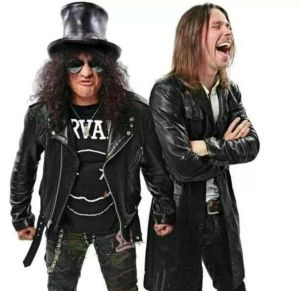 Slash said he became aware of Kennedy when the singer was asked to audition for the now-defunct Velvet Revolver. While Kennedy initially declined the offer to audition for Velvet Revolver, the singer consented to contribute his talents to Slash’s debut album when asked (which, in addition to Kennedy, also featured an impressive and vast array of vocalists such as Ian Astbury, Ozzy Osbourne, Chris Cornell and Lemmy Kilmister).

Slash eventually found himself asking Kennedy to join him on tour to promote the album. The tour was so successful that Kennedy became a permanent fixture, handling all the vocal chores on Slash’s second release, Apocalyptic Love.

“He knew the whole catalog,” Slash remembered, “which I found totally amazing. One rehearsal with him and I knew I made the right decision. We just kind of meshed together. The chemistry just happened and we went from there.”

Feigning an innocent look, one hesitates but asks how the guitarist has handled the inevitable comparisons between Kennedy and Rose, especially since Kennedy has more than ably handled the Guns N’ Roses songs.
Letting out something between a groan and a laugh, Slash good-naturedly looks over this forbidden journalistic faux pas and gives an indirect answer.

“You can’t play one thing all your life,” Slash stated diplomatically. “I’ve moved on. Unfortunately, there are going to be people who aren’t going to go along with you. But I have grown, mentally and artistically, and Myles has fortunately been part of that.” 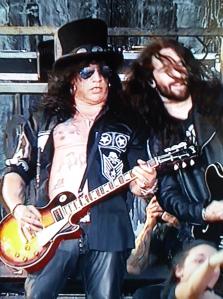 Throw in bassist Todd Kerns, drummer Brent Fitz, and touring rhythm guitarist Frank Sidoris and you have a band that Slash is happy with and one that maybe has the longest names in history – Slash: Featuring Myles Kennedy and the Conspirators. According to the guitarist, it wasn’t supposed to be that way.

“Well, we were having trouble fitting ‘Slash Featuring Myles Kennedy in Addition to Todd Kerns. Oh And Also Don’t Forget Brent Fitz. And Frank Sidoris’ on the marquees,” Slash deadpanned. “We came up with the most abbreviated name possible, especially if we want to add more musicians down the road! No, really, in all fairness, the contributions of all these guys and their extreme musicianship really demanded that they be recognized.”

Supporting his musicians aside, Slash has also been an ardent partisan of horror films.

“What can I say? I dig creepy stuff,” the guitarist laughed. “I’m more into the monster-type sensibility rather than the psychotic aspect of it. I’m a very creative person, and this is just another side of me that I have chosen to explore.”

Via the guitarist’s company, Slasher Films, Nothing Left to Fear was released in 2013. With music by Slash and featuring actress Ann Heche, the story revolves around a pastor and his family moving to Kansas and encountering malevolent forces. The company’s latest production, The Hell Within, is slated to begin production in early 2016, with Slash recently launching a fan-backed crowdfundung campaign for the project.

“It gives the fans the chance to feel they are participating in the project,” Slash said. “It’s a great way to raise some equity for projects like this and lets me have artistic control, like I don’t have to answer to corporate backers or anything.”

Back to the music business, Slash – along with Kennedy and the Conspirators – have constantly been writing on the road for the fourth album. The band has plans to continue touring until the end of December, with plans to release its fourth album sometime in 2016.

“We’ve had lots of time to explore things musically, being on the road,” Slash stated. “I can’t say if we are straying from the formula, so to speak. My work comes out through jamming and stints in soundcheck. I record the ideas, which will be brought into the studio. I guess I really won’t know what will come out until then.”

Interestingly enough, Kennedy’s band, the previously mentioned Alter Bridge, is supposedly going to release another widely-anticipated album in 2016. Does Slash feel any sense of foreboding to this?

“We’ve worked out a system,” Slash details, “you know, plans. I am comfortable with what Myles is doing and when he is doing it. He’s on this insane timetable, but he has admirably given his attention to both myself and Alter Bridge. He’s very devoted to his music and respectful to me. No worries.”

The guitarist, who turned 50 this year, believes he has a lot more to explore in life. While groaning at the “50 is the new 30 concept,” Slash said he is looking forward to many more years of creating whatever stimulates his senses.

“I never thought, wow, at age such I have to retire, hang it up,” he said. “I’m relevant to myself. I don’t see myself stopping at any point.”

2 comments on “Year of the Slash”