Talk to any member of any band out there – they know that talent alone is not enough to raise them up to the great heights they desire against the thousands and thousands of groups flooding the market. Fans, as they are aware, are the backbone support and key element that no band can exist without and, as a result, many bands have developed a real and loyal affinity with their audiences.

Take the members of Like A Storm, for example – Chris Brooks, Kent Brooks, Matt Brooks and Zach Wood. They have the talent, the music to back them up, their look down pat, and a device called a didgeridoo that have drawn in avid supporters throughout the world.

While the band relies on and is represented by the official business camp of publicists, Web masters, marketing professionals and the like, there are still many roles out there that supporters take upon themselves to fill. These are the “Super-Supporters;” those who take the passion that they have for the band and, in turn, work it into one powerful promotional tool.

Gina Zeck is one of those “Super-Supporters,” and she has taken her devotion for Like A Storm to a whole different level by administrating and maintaining Like A Storm’s Fan Community Page on Facebook. Check her BEHIND THE SCENES story out! (All photos are courtesy of Ms. Zeck.)

Please give me your musical background. Have you always been a big supporter of music in general?

One word – Prince! I fell in love with him when I was just 11-years-old.  He being a musical genius made most people pale in comparison to me. However, he was so diverse; he is the reason that I love all types of music from country, to rock, to pop.  He taught me to recognize how hard it is in the industry and what it truly means to “own your own.”

When did you first notice Like A Storm (LAS)? What drew you to the band?

I first discovered LAS in September 2012. They were opening for Creed in Atlantic City, NJ. There were many LAS fans that traveled to see them and had given me the heads up to “pay attention to this band.” I stood back and watched.  They showed immediate talent, but the song “Just Save Me,” sucked me in.  I always laugh when I think about catching Matt’s guitar pick that night.  I could tell the girl next to me really wanted it, so I gave it to her and said “Here you go. I don’t even know who this guy is!”   I think what drew me to the band and keeps me a fan is simple. They are good people. Everything else follows after. They work hard, which shines through in their music. Their talent is evident in that each song is unique and you connect with the lyrics. That’s critical for any artist.  And honestly, I am so proud of their journey that I will always want to be there to watch them continue to grow and succeed.

When and why did you decide to do an unofficial band community page? How much time do you devote to it? Is it harder than when you first began, especially since you work full-time in a totally different industry?

Early 2015, I noticed there was a LAS page that was out there, but not active. I thought it would be both fun for the fans and helpful for LAS. It would give them more exposure, and be a great support place for fans to post pictures, videos, events and contests. We could all share our experiences we had with the guys and invite new fans to our “LAS family.” There were already about 500 members and I thought, why not build off that.  I gave it a new, unique name, updated the cover photo and began to post.  I try to spend time daily on the page posting pictures, updates, or promoting the upcoming shows. I also always oversee the fans posts; to make sure is it professional and appropriate for all audiences. It is actually easier now to run the page then when I started.  I have made connections with so many amazing people, that I usually always have material I can use. Even though I work in an entirely different industry, I always have time for the page, as that is a place where my creativity comes out and I always love helping LAS. The page has recently reached over 2,000 members and I am so proud of our “LAS Community.”

How do you attract and maintain followers?

Activity is key. You need to post often and things of interest. Over the past two-and-a-half years of running the page, you begin to recognize your audience and what format they like pictures in, etc. You don’t want the page to sit dormant too long as people will lose interest or just simply forget about it. It’s the same concept as productive advertising.

How do you keep the page relevant to followers during the band’s “down” time?

During the bands “down” time, I use photos that several generous photographers have given me permission to use. Several photographers will “dropbox” me and I keep organized folders of photos I haven’t used yet, to try to always have fresh material. I also do “fan give-a-ways” with signed photos or fun items, to keep interest on the page and keep the fans actively involved with one another.

Did you ever think of pursuing a career in Public Relations?

Honestly, I never thought of pursuing a career in PR. However, recently I have really enjoyed promoting several products in different industries. When I believe in something, I want to help make it most successful!  I think when you are passionate about something, believe in it and put your mind to it; you are a great asset to the business you support. 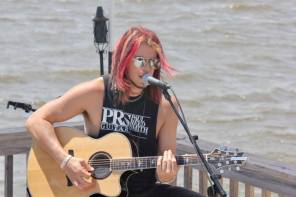 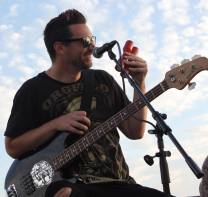 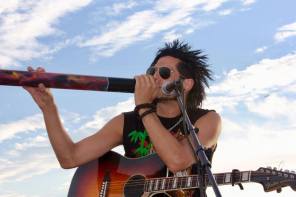 What does the band think about your page? Do the members interact with it and you?

Like A Storm has always been appreciative of any fan that supports them in any way. They are kind in signing things for the fan page give-a-ways, and participating in updating the fan page cover photo. I believe they appreciate the fan interaction, the promotional/informative posts as well as photos and ideas the fans have. The band has always been supportive of my fan page and I believe respect is key. They respect my fan page and I’ll always respect them.

What are the benefits/detriments of doing a band page?

The best benefit of doing the page is that I enjoy helping spread the word about LAS. Every new member is another new fan and the guys deserve nothing but immense success! Another very special thing, is that I have met so many amazing people all over the world. It’s amazing when you fly seven hours and one of your best friends is on the other side.  I have made the most wonderful friendships through this band and fan page. People with loving and good hearts that I’ll never forget.

Do you plan on doing pages for other bands?

As of now, I do not work on other pages. I have quite a lot going on with my full-time job, my two part time jobs and of course, my Like A Storm Fan page keeps me busy! I’ve recently dabbled with the thought of helping another band that I have a lot of interest in, but time will tell…

What would have to happen to make you give up doing the page?

I’ll always do whatever I can to help promote, support and share their talents. If my family needed me I would direct my time to them, of course, but I’d hope to pick up where I left off.

What are some of the goals you have for the page?

Goals…. That’s easy… More exposure for the band! Spread the ‘Storm, tell your friends about the band, bring them to a show, add them to the page and repeat.  We should all have one goal – To love and support our guys in LAS!

6 comments on “Going above & beyond – the power of Super-Supporter, Gina Zeck!”